The boys have been cute recently, but the house has basically been uneventful. Jacob is so funny and he is still singing all the time! The other night at dinner he just started singing, "I'm so proud to be an American, be an American, be an American...." Brian and I just giggled between ourselves because we could not believe he was singing that! It was so cute! Tonight he had a hooded towel on his head and he kept telling us that he was the scary Easter bunny. We told him that the Easter bunny is not scary; Uncle Derek is scary (from his dressing up as the Homer Simpson Easter bunny at my parents' party). So then he started pretending to be Uncle Derek and he wanted to scare us.


Up until tonight (April 21), Andrew had not walked very much around the house. He had taken a few steps, but his preferred way of moving around the house was crawling. Last night I think I saw his "Ah-Hah" moment. He was standing up near the couch, and he took a step. Then I could see his little wheels turning in his head, and he took about 10 more steps. That was pretty awesome to see him processing his thoughts about walking. But he completely took off today! Here is a video clip.

Andrew is also a climber. He loves to try to sneak his way up the stairs, but he never makes it higher than 1 or 2 steps. Jacob got a fire truck that he can drive and ride for his birthday, and Andrew can climb in it and stand on the seat. I have not seen him do this, but Brian says it is all he wanted to do Saturday evening. We will definitely be busy keeping him safe for a while.
Posted by Carrie at Wednesday, April 21, 2010 No comments:

We sent cupcakes to school on Andrew's birthday. Here is a picture from his school birthday party. Love that smile! 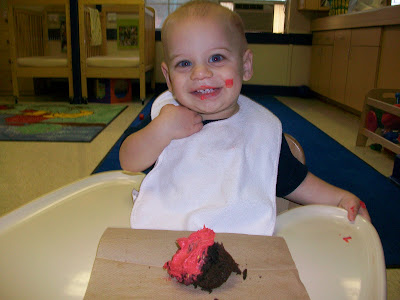 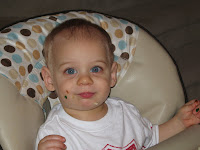 Well...he did it. He actually turned 1. I'm sad about it and so happy all at the same time. I know I've said it many times before, but I truly look at him and think that he is only 6 months old. Okay...let's pick it up a little and get on with the exciting things Andrew has been up to. 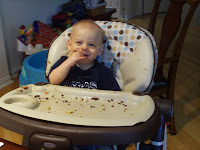 He is 23 lb. 3 oz. He is 30 inches long, and his head circumference is 48 cm. I think he looks like a chunky monkey, but for weight he is in the 56th percentile. His body shape is definitely different than Jacob's. He can fit into 12 month clothes pretty good, but I think 18 months would give him a little wiggle room. What else is he up to? 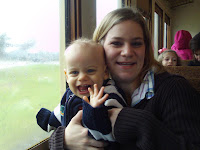 It's been a fast year! I just adore my baby boy, and I can't wait to see everything to come in his second year!