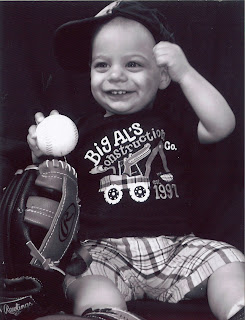 I blog a lot about how sweet my little Andrew is. Oh my goodness...he has not been sweet the last few days! He has started to hit and throw really horrid fits!

The other day we were all hanging out in his room. He was hanging around me and then he just walked up and hit me. Of course, it didn't hurt, but it was an intentional hit...no doubt about it. So I asked Brian what we can do about that at his age; we concluded that we should just ignore it. Well the very next second he puts his little arm in the air and hits me across the face...full force. What the hell?!?! We decided that he would need to spend some time in his crib when he behaves like that...at least for now.

Then we had another incident this morning. I made a blueberry muffin for his breakfast. I saw him holding the muffin, and he looked confused about what to do with it. So I basically split it in half. He went crazy! He first threw his hands on the table. Then he threw his plate onto the floor; threw his milk on the floor; and attempted to throw Jacob's plate onto the floor. I was shocked (and I'm not going to lie...a little pissed!). So I got him ready for school and he got to eat breakfast there. I'm a little curious about how things will be tomorrow morning.

He still takes his pacifier at night, too. I don't have a problem with it because he doesn't wake up in the middle of the night crying for it. That was all true until 2-3 nights ago. He wakes up between 3-4:00 a.m. and yells for it. In about a week I'd like to take it away. Why a week you ask? They are going to start installing our new floors tomorrow!!! While they are working on the floors we are going to stay at Allison's house. So I don't want to take away his pacifier while we're staying in away from home.

Take a look at what Brian saw crawling out from under our Chaise tonight. I'd be lying if I said I wasn't a little freaked out. 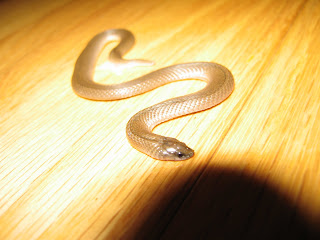 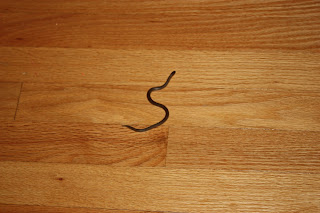 Andrew is still talking. I am still amazed by it. Today his sheet from school said that he practiced saying "cracker" during lunch today. So, of course, I got him to say it again here at home! He also says, "bumpity bump." Jacob is completely into pretending to drive trucks - any kind of truck - garbage, fire, ambulance. Anyway, when he drives, I pretend that we drive over bumps and say bumpity bump. Andrew has caught on, and now he will randomly start bouncing up and down and say it. He's getting so big! I think I'm going to get down the 18 month clothes this weekend. The 12 month clothes are getting a little tight.

Jacob has such a cute little imagination, and he really says the funniest things! Like I said before, he pretends to drive all kinds of trucks. If it is a garbage truck, he likes for Brian or me to pretend to be trash and he takes us to the dump. For a fire truck, we put out a fire. And for the ambulance, he likes for us to sit in the back of the ambulance and he takes us to the hospital. At least he is using the truck for the correct purpose!

Jacob also loves to pretend to be a baker. He will put the potholders on his hands, pick up a pretend cake, and bake a cake for me. Last week Andrew decided to play. Take a look! 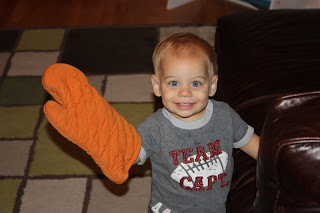 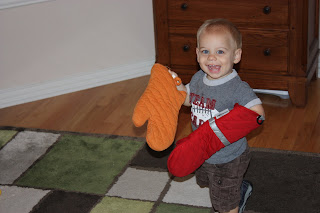 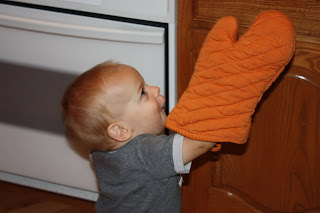 He was trying to help me here.

Here is a picture of both boys on our Tigger rocking horse! Andrew LOVES it, so naturally Jacob has become interested in it again. 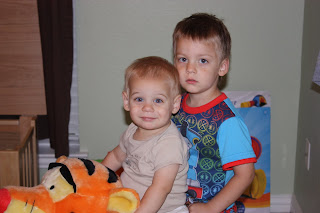 Finally Andrew has learned Ring Around The Rosy. So cute! 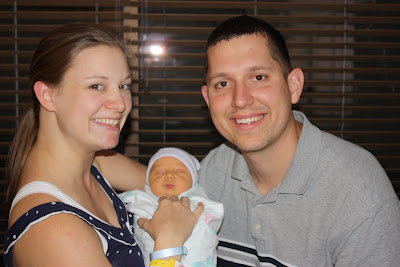 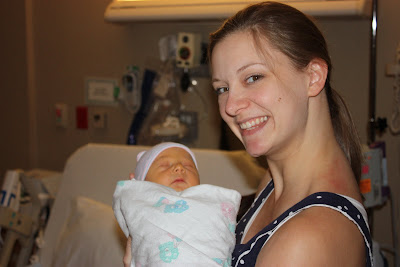 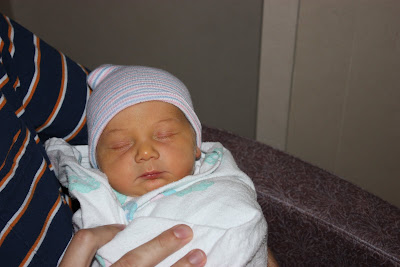 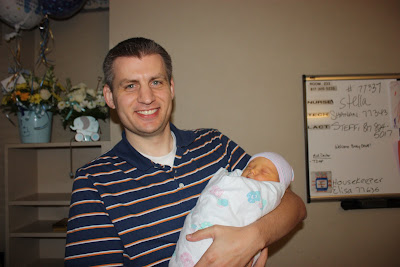 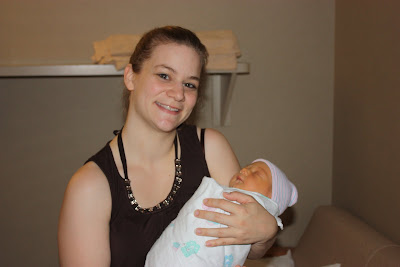 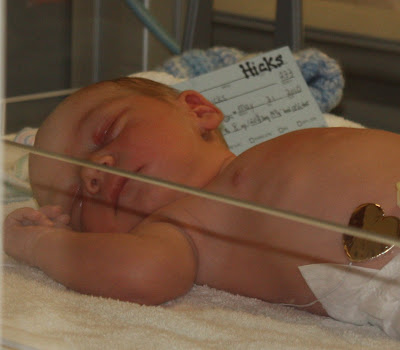 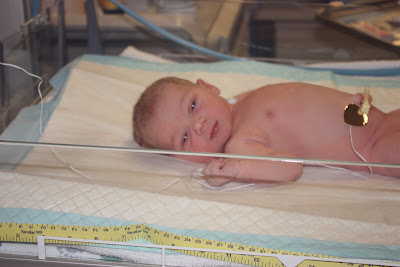 I have a picture like this of Andrew. To this day it is still one of my favorite pictures of him! Thanks Marlene! 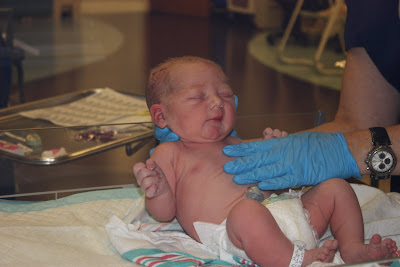 I thought I'd share some of my pictures of my new nephew Grant Michael. He is so sweet!
I was so emotional the day he was born. It was like I was having my own children again. Crazy!
Posted by Carrie at Thursday, June 17, 2010 No comments:

Yep...you're reading it correctly! At almost 14 months old, my son has started talking. He says Milk, Ball, Dog, and last night he started waving and said, "Bye Bye." I am in total shock over it! He says "ball" with a cute little southern drawl. Dog is new as of Monday. And on Wednesday he started doing a cute trick that Jacob did. Whenever we would leave Jacob, we would hold up our finger and tell him that we'd be right back. Jacob did this to Andrew on Wednesday night, and so Andrew started holding up his finger and saying his version of Right Back. Of course we weren't there to witness it. But when I held him later and said, "Right back," he looked at me, smiled, and held up his finger.

He learned another old Jacob trick. This one is for Granddaddy.

Andrew has become very attached to his blanket. When I walk into his room to get him in the morning, he bends down to pick it up and then waits for me to pick him up. If it is in his crib (because I hate having blankets on the floor...I'm clumsy and am sure to slip on one some day), he will stand in front of his crib and point to it. I think it is the cutest thing ever! Let's see how cute it is if he doesn't give it up in several years. :)

He and Jacob are starting to fight over toys just a bit. It's really not too bad....yet. And actually, I enjoy it when they fight. Jacob shows potential to be a pushover (he is just too sweet!), so I'm happy to let him fight with Andrew to get his toys back. Andrew is starting to get mad and whine and try to make himself cry when Jacob takes toys back. It's new, so it's still funny.

We do not have ANY plans for this weekend! I'm going to try a new grocery shopping and cooking schedule....boring. Maybe I'll sneak out to catch a peak at my nephew!
Posted by Carrie at Friday, June 04, 2010 No comments: