Jacob is doing really well during his transition period at school. They said he did perfectly the first day! Yesterday I picked him up, and they said he did pretty well until nap time. And I'm thinking, well what happened? I've never had any teachers tell me there was a problem at nap time. I got the story from 3 different teachers, one of which was the lead teacher. From what I could gather he had played really hard during outside time right before lunch. Then while he was eating lunch they turned out the lights and started to pull the cots out. That's when he freaked out. I think he thought they weren't going to let him finish eating, but I'm not sure. The lead teacher, Mrs. Miller, told me that he went right down for his nap. She said she patted his back only a few times and he was gone. She thought he was just really tired. She told me that if he does okay with nap time today, then he'll be in there full time next week! He does tell us that Mrs. Miller is his friend when we ask, which is a lot better than what he currently tells us about Mrs. Flores, his current teacher. We can ask him about everyone in his current class if they are his friend, and he'll say yes. When we ask about Mrs. Flores, he always tells us no. Mrs. Flores isn't exactly our friend either, so we haven't been too worried about it. :)

We received the surgery confirmation from the doctor for the c-section! I'm scheduled to have surgery on April 10 at noon. I wish it were at an earlier time. A mama needs to eat!! I'm still hoping that I get to go into labor with this one like I did with Jacob. That's the fun part of labor; I don't need any of the pushing to go with it.

This weekend I think my mom is going to come out to help us get a little more organized for Andrew's arrival. There really isn't that much more to do. I'd like to install some drawers to go in cabinets because our house does not have any extra storage. I ordered some new towels last night from Pottery Barn (I just ordered some bedding from there, and the pattern of the towels matches our bedroom). WOW! That place is super expensive! I've been nesting so badly, and there isn't much to do in other rooms right now. So my bedroom and bathroom get all of the special attention! I'll have to post pics when I get everything finished. After the bathroom, I'll just need to hang some curtains.
Posted by Carrie at Friday, February 27, 2009 1 comment:

Brian realized last week that Jacob was scheduled to move up to the next room in daycare right when Baby Andrew (we're trying it on...not too shabby) is supposed to arrive. We were a little concerned about how Jacob would handle that much change at once. So Brian talked to the daycare director last week, and she told him that they would see what they could do about it. They thought they would start to transition him at the end of March.

Well yesterday I received a phone call from the daycare. Other daycare moms can relate, but my heart stopped at first because I thought he might be sick. So I immediately started to think about all of the things I would need to wrap up at work in just a few minutes before I could leave. Jacob is just fine, though. The director was calling to see how we felt about Jacob moving up even earlier...."like tomorrow," is what she said. Apparently there was another kid in the middle of transitioning, but the parents have decided to wait for him/her to finish. So Jacob gets to start moving up today!! I'm so excited for him! He always handles the transition to a new room pretty well.

In other news, we have set up a little camera in Jacob's room (which will be the nursery again soon). We have really enjoyed watching him go to sleep the last few nights. He will play with Tad, his singing frog. Then he sits up, rolls around, curls up like he is going to go to sleep, throws his leg over the rail, and last night he even crawled down to the foot of the bed and looked outside his doors for a minute or so while he was laying on his belly (his room is actually an office in the house and there are 2 doors with windows). He's so quiet in there after we put him down that we never knew he was awake for so long! And I love watching Jacob TV in the mornings. If he's still sleeping, I just get myself ready without feeling guilty about it. Jacob is certainly big enough to get out of bed by himself, but he always ALWAYS waits for us to get him in the mornings. Those days are numbered, I'm sure.
Posted by Carrie at Wednesday, February 25, 2009 1 comment:

We have started an arrival date pool here in the office. So far the winner only gets the pride of guessing the correct date. But it could be fun! Let me know if you'd like for me to put you on our calendar!
Posted by Carrie at Friday, February 20, 2009 2 comments:

About a week ago, I got really fired up about something at work. My blood pressure shot up and I was completely pissed off at our new telecommunications vendor. It made my back really sore, and I knew that once I went to bed and got up Saturday morning, it would all feel better. Yeah...not so much. I have been miserable since then! So I realized Saturday morning that the baby had probably dropped. I've been paying more attention to his movement, and I have not felt him in my rib cage at all like I had. He has not been anywhere near my rib cage! So then I was completely worried all weekend about going into labor early (I thought you were only supposed to overreact like that during your first pregnancy). I decided to get one of those abdominal belts to hold everything up, and it has helped a lot with my discomfort.
So yesterday I had an appointment to see my doctor. Of course, he acts like this is nothing at all to worry about. Yesterday was a very uncomfortable day for me, so his cheery attitude was just annoying. I usually find it uplifting and I feel great when I walk out of there. We chose the date of April 10 to do a c-section, but I honestly don't think he'll wait that long. Jacob came 3 weeks before his due date. My doctor told us a couple of months ago that that really doesn't mean much for this pregnancy, but yesterday he told me this one would probably come early since the last one did.
We are getting closer to a name, too! We're pretty sure the first name will be Andrew. We've been kicking around a couple of middle names.
Jacob has become much more interested in the baby recently, too! He likes to pat my tummy and say, "Baby." He has also taken an interest in one of his stuffed animals.
Here is a picture of my boys playing on the computer. Jacob loves Baby Smash, and now whenever he sees Brian on the computer he insists on playing it. I love this picture! 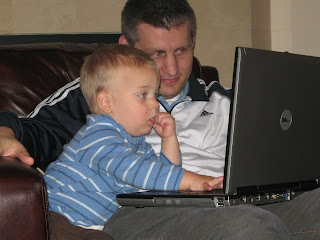 I had been trying to take candid shots, and then Jacob looked up and said, "cheese!" So here's a posed picture. 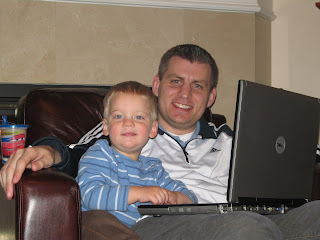 Grandmother came over to visit Friday evening. Jacob decided to show off a bit to the tunes of Tad, Jacob's new best friend. He has never had much of an interest in stuffed animals. About a week ago, he became very attached to Tad. He likes to sleep with him now, and he likes for Tad to read books with us at night. He even told me this morning that Tad was stinky (he wasn't...we've got the poop play under control for now).

So here he is singing the ABC's (okay...it's only 2 letters but it's a start); dancing to Head, Shoulders, Knees and Toes; doing The Itsy Bitsy Spider; and doing the Twist. I could not believe he did it all in one night!

Here are a few videos we've taken of Jacob recently.

Jacob Speaks! (turn up your volume...his voice is so quiet)

We had a really good weekend! My little helper helped me around the house yesterday and at the grocery store. He told me that he wanted to make cookies for his daddy, so we're going to do that later this week. He told me this morning that he wanted to dance, too! I have a video of his latest dance moves, but I need to edit it down. Brian and I spent most of yesterday preparing for the new baby. It is amazing to me the amount of stuff 2 people can accumulate! And the paperwork...ugh! Last night Jacob was picking out books to read. We have one called I Love You Through and Through. He picked it out and said "I love you." It was a great ending to the weekend!

And here's a cute picture to top it all off! It's not very clear, but he's smiling! 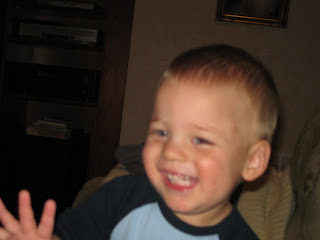