I knew our Christmas weekend was going to be non-stop.  With the two kids who are totally into Christmas this year, it was impossible to completely prepare for it mentally.

Friday, December 23 - Steve's family, Sarah's family, and my family drove down to Red Oak to have our immediate family Christmas.  The boys jumped right into the opening presents event.  They got some really good gifts!  The favorites were cowboy hats, a stick horse for Andrew, trains for Andrew, and the Bat Mobile and Joker for Jacob.  Here are the pics.

Saturday, December 24 - We had the whole Paxton clan out to Red Oak.  It was really nice!  Last year we tried something different by having it at a restaurant.  This year, everyone wanted it to be at someone's house, and they were all SO excited that my parents volunteered to host.  It was probably one of our best Christmases yet!

The plan was for everyone to arrive around noon, and then we would eat around 12:30.  This is where I found myself when it was time to eat. 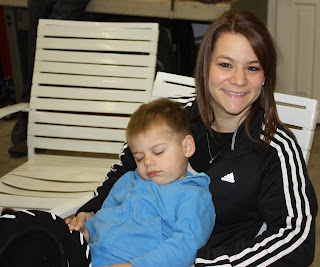 He literally crawled up into my lap, got comfy, and went to sleep.
I cannot remember the last time that happened.

Andrew woke up about halfway into lunch time by having an accident.  We both changed clothes and then sat down to eat.  Then the kids played for a while while the adults visited.  ﻿
﻿


After play time, we played our annual White Elephant Game.  Brian ended up with ingredients to make S'mores and a gift certificate to the movies.  I ended up with a recipe box perfect for pulling recipes out of magazines!  I was pumped!  I tear out recipes all the time and have no place to put them.
﻿

Then we took some pics of our entire family and just my family.


Christmas was off to a great start!  Now it was time to load up the boys' gifts and head home to get ready for Santa!﻿﻿
Posted by Carrie at Monday, December 26, 2011 1 comment:

My boys LOVE The Polar Express.  They know all the music and a lot of the lines.  It's amazing!  We literally find them playing around the house and singing the songs - even the Josh Groban song and the slow song the little boy sings with the girl ("When Christmas Comes to Town").

Anyway, we heard that they have a train that is similar to the Polar Express in Grapevine.  Brian and I decided to surprise the kids with it last night.

Friday afternoon, the boys went to Red Oak.  My parents took the boys to get cowboy boots (which they love!).  Brian and I showed up to get them while they were eating lunch.  We let them play a little longer, and then we took them home.  All I told them was that after nap time, we were going to get ready for a special surprise from Mommy and Daddy.
First, we went to see the Muppet movie.  I'm a HUGE fan of the Muppets!  So when Andrew had had enough, Brian took him out of the theater.  It was great, and I think Jacob is a Muffet fan now, too!


Next we parked by the train station in Grapevine.  Brian let me out before they parked so that I could get the tickets.  Then I met up with them, and we changed the boys into their PJ's.  When we told them we were going to ride the North Pole Express, Jacob immediately got excited about riding the Polar Express.  I told him it was like the Polar Express, but they called it the North Pole Express.


The train was running late.  So we had to wait outside for about 30 minutes before they let us into the tent with the pre-ride show.  In my opinion, they could've gotten the train back on schedule had they skipped the pre-ride show for our train.  It was totally cheesy and quite painful.  Not to mention, we had to wait probably another 30 minutes inside this tent...with tired children...before this stupid show started.  Jacob actually LOVED it!  So, okay...worth it a little.  :)


﻿ While we were waiting, Brian took the boys to look at the train.  Andrew immediately said he didn't want to ride the train because he was scared of it, but he did just fine!


So on the train, there was more obnoxious entertaining singing.  It went on the ENTIRE trip.  Again, Jacob loved it!  Andrew sang along, too!  Santa made his way through the cars, and he gave each kid a bell.  Jacob rang his the entire time.  After the ride, all of the kids got hot chocolate.  It was a GREAT afternoon!  They were both so surprised and everyone had fun!  This is really shaping up to be the best Christmas we've ever had!

A couple of weeks ago, I had the idea that it would be fun to get my girlfriends together for a holiday party.  So I bounced the idea off of one of my best friends, Megan, and she suggested a Holiday Dinner Party.  From there, the idea grew!  We had to send invitations and plan the meal quickly.

We had a Veggie Tray, Cheese and Crackers Tray, and Spinach Dip for Appetizers. 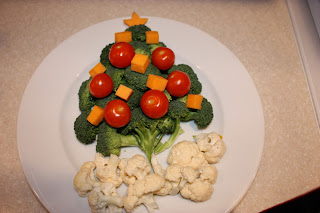 
The Salad was supposed to look like a gift.  I think I bought tomatoes that were too small, but the presentation was still different than a normal salad.  Check out my Pinterest to see where I found the inspiration.  http://pinterest.com/cedomm/ 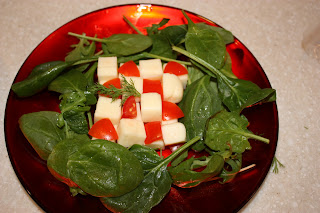 Flank Steak with Roasted Asparagus and Mashed Potatoes for Dinner.

Of course, there was wine - lots of wine.

I had a few games that we played, too!  I had a White Elephant game.  Everything was from Kirkland's but they were all really cute Christmas Decoration items.  Then I asked each person to write down her favorite Christmas memory.  Then I read them aloud, and we had to guess who wrote the story.  I also bought a Pickle Ornament.  The pickle ornament is a German tradition.  You hide the ornament on your tree, and the child who finds it first gets to open a special gift or the first gift of Christmas.  I had never heard of this until this year.  Since my kids are probably too young, I thought it would be fun to try it out on my girlfriends.  Success! 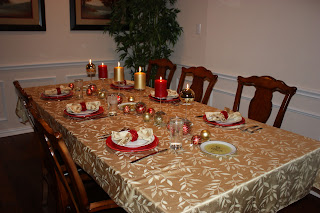 The whole night was so much fun!  It was a big enough deal where I needed things to look cute and the house to be pretty clean, but it was low key enough to where I did not feel stressed at all.

Big Shout Out to Megan who helped pull it all together!  And a big thanks to Megan, Emily, and Cassie who started the clean up process before they left. 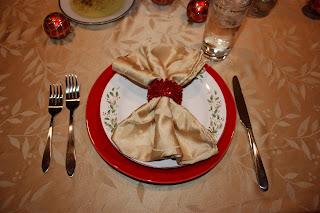 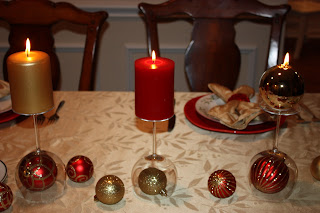 Thanksgiving was fantastic this year!  Brian and I hosted his family: his mom, sister, her husband, his parents, and his friend Chris (who was a Thanksgiving orphan).  Cooking + Scheduling Chaos + House Full of People = Happy Carrie!  It was so much fun!

The day before, we kept the boys home from school.  This was a change in the original plan which was to send them off to school.  But Jacob was SO into it this year and extremely excited about our "Thanksgiving Feast" that we knew he would love to help.  And if we keep Jacob home, we can't send Andrew to school (not in our minds at least).  Andrew helped me cook, and you know, he did really well!  He gets excited and prefers to do things "the Andrew way," but the threat of getting kicked out of the kitchen was enough to keep him in line for the most part.  He helped me with the fruit salad, corn pudding, and green bean casserole.  Jacob helped Brian with cleaning the house.  Actually, he didn't help that much.  He put on all of his tool belt, safety goggles, and John Deere cap and pretended to work.  Brian and I were both surprised, but he kept himself busy.  And props to Brian!  He took off work for the whole week, and he worked his little tail off around the house!  It looked amazing!  And it kind of worked out for me because I prefer to be in the kitchen, and he prefers to stay out of the kitchen.  :)

Wednesday evening the boys went to Allison's house.  They helped to crumble up the cornbread for her dressing/stuffing.  They loved it!  Late that night Emily brought the turkey to the house, and we schemed about how to baste and roast Tom.  Jacob stayed up to watch her prep the turkey.  He just had to see Tom before he was cooking.  When I put Andrew to bed, I asked him if he was excited about our Thanksgiving Feast.  He sat up in bed, and he proudly listed everything that he helped to make that day!  To me, its another sign that I'm gonna need to keep an eye on this boy....probably for forever.  It was amazing to me because we had started cooking about 12 hours earlier.

The big day came very quickly after only about 3 hours of sleep.  I put Tom in the oven about 30 minutes later than I had originally planned.  Our guests are all very casual, so I was banking on their not being uptighth about my missing my 1:00 lunch time mark.  I was going to baste Tom with his own drippings, but he was not very fatty at all!  So on a whim, I made a baste from butter, thyme, poultry seasoning, and sage. I only missed my mark by 45 minutes, so I would've been rocking it had I put the turkey in when I originally planned.  I'll take it!  Everyone was so nice about the meal and our home.

When Emily arrived around 11:00-ish, the wine started flowing, and it flowed very smoothly for this lady right here...I had not had anything to eat before lunch time.  Three glasses later, I was ready for a nap!  lol!  So I snuck upstairs to put the boys down for their naps (which did not go so well).  When Brian came upstairs to see what was going on, I was fast asleep, and the boys were playing.  I felt much better and stayed away from the wine the rest of the day.  I was happy to see that everyone had made himself comfortable at the house.  They were veggin' out watching the Cowboys and visiting with each other.  My parents brought Matthew over to play for a while, too!

At the end of the day, I told Brian that I thought the whole day was a success.  He told me, "I think it's the best we've had in a while."  Anyone who knows Brian knows that things like this are not said unless he truly means it.  So, of course, I cried.  :)  It was awesome, and he is already talking about hosting again next year!

Here are some pics.  I did not take any, but Allison took a couple.  One is of the table, and the other is Emily, Antonio, Brian, and me in the kitchen (or kitchen area). 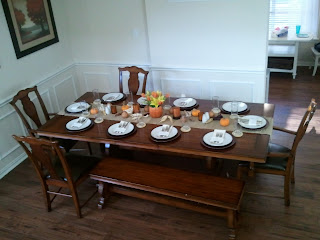 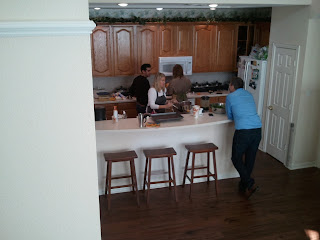