We took the boys to get some Christmas pictures on Saturday. Take a peek! 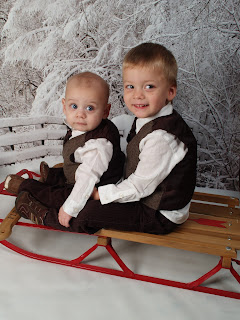 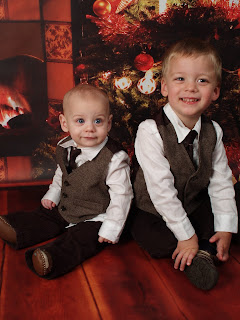 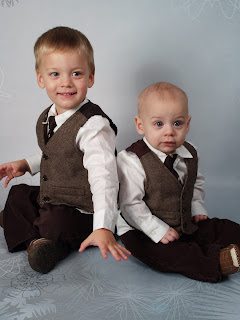 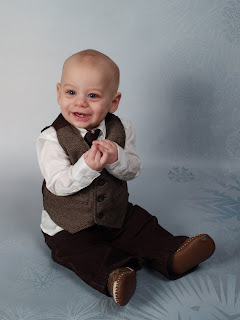 Thanksgiving week did not go as expected, but in the end it was great! Brian wasn't feeling well the Friday before Thanksgiving. So he went to the doctor and got these killer prescriptions that totally knocked him out. Andrew was sick and not sleeping well starting Friday night. He didn't start sleeping even close to normally until the night before Thanksgiving.
Saturday before Thanksgiving, Jacob spent the night with my parents. He had a blast! They bought the boys these cute little John Deere boots, too. Jacob was so excited about his new boots, and he was completely refreshed after spending a night away from home.
Since Andrew was sick, Brian was unable to get much rest during the week. He had taken the week off from work, so it was a no-brainer that he would keep Andrew and I could go to work. By Wednesday, he was completely wiped out! I took Andrew to the doctor on Wednesday and the nurse confirmed that he had an ear infection.
Thanksgiving Day was great! We started the day at Grandmother's house with Antonio, Emily, and Sirius. Then we headed over to Steve's house. We watched the Cowboy game over there, and Jacob wore his Tony Romo jersey. He told us several times that he was Jacob Romo. Here is a picture of the boys' turkey shirts. We made one for Jacob for his first Thanksgiving, and I thought he would want to make one when he saw Andrew making one. 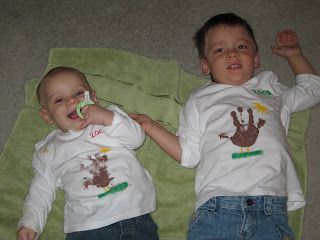 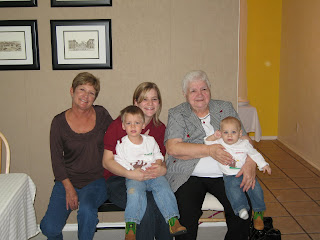 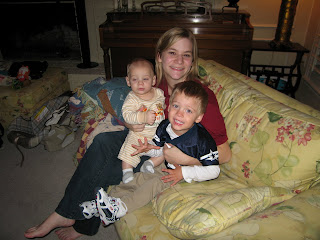 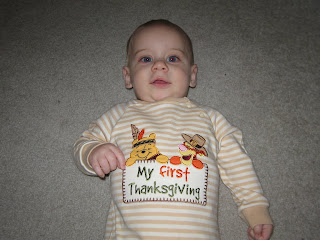 On Friday we started putting up our Christmas tree. On Sunday we actually finished. I had the best weekend with my boys! I cannot remember exactly what we did except make a trip to Costco and Target, but we had a lot of fun around the house. Jacob's new favorite song is "Santa Claus is Coming to Town." He especially likes the Kids Bop version and wants to hear it over and over again in the car. He sings it all the time!
Andrew is starting to get really clingy. I love and hate this stage. It is so cute how he is all over me, but I can barely leave the room. I'm just happy I don't have to take him back to school tomorrow.
Jacob wrote his name this morning. This is the closest I've seen him come yet. Go Jacob! 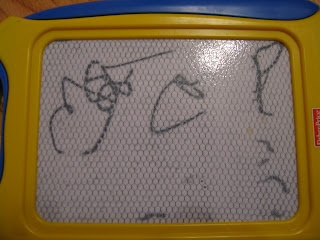 Happy Birthday To You

Jacob is starting to sing around the house. I love it! The other day he was singing "Happy Birthday." It was not anyone's birthday in the house. So we asked him whose birthday it was (assuming they sang it at school), and he replied, "my birthday." He also likes to sing "Twinkle Twinkle Little Star" and play the guitar that we got with Rock Band. In fact, anytime we see a guitar in a store he asks to play "Twinkle Little Star." Last night he was singing "Three Blind Mice," but those are the only words he knows. Last night after we put him to bed I could hear him singing a song (and it sounded pretty good for a 2 year old!), but I could not figure out what song it was. So sweet!

Jacob is also saying a lot of things that we say. Here is a list:
"Right now"
"Andrew, you okay" (this is only when Andrew is crying and will not stop; he learned it from me in the car)
"Yes ma'am" (this is fairly new...he learned it at school)
"I need to go potty really/very badly" (again from me. I usually say this on the weekend morning when I'm flying solo with the kids)
"How your day?"
"Pretty good"

He is also quite expressive with his frustration these days. He will hit the table, couch, wall, or anything else in sight when he gets mad; usually this comes after we tell him no for something that he really wants to do. Rarely he will hit one of us or Andrew. His new thing is that he will roar at us. It's kind of funny outside of the moment. We'll put him in time out, and, again this is only when he's really mad, he will make the sound and say very loudly "RRROOOAAARRR!"

Right now he is very excited about his new shoes! He and Andrew both LOVE shoes! The new shoes are a great threat for Jacob right now. That will probably run out soon, but it's working pretty well for now. Andrew will reach and scoot to shoes and try to chew on them, but we catch him before he can actually put them in his mouth. Okay, he has actually made it to one of Jacob's shoes and I caught him chewing on it. When Brian asked me how long he was chewing on it, I calmly replied "I don't know." The second child is treated so differently from the first!

One out of the two teeth that were about to break the gums in Andrew's mouth has come in. I really need to take a picture before they come in too much. His smile looks so funny right now! He does not have his front teeth (but one has broken the gums), but he has the next two teeth. I wish they had been in for Halloween because it looks a little vampire-ish. Then he has one bottom tooth, and a second has broken the gums. He was very interested in Jacob's books last night. It was amazing to watch! He would pull himself up on the book basket and pull them out. Then he would promptly put them in his mouth! I was trying to read a story to both boys last night, and Andrew started reaching for the book and was touching the pages. So then Jacob told me he wanted to touch the book. They were both so into the book (but I'm sure they did not hear the story...or the part I actually got to read). Andrew is now eating sweet potatoes, carrots, squash, green beans, and peas. He has had some banana, but we wanted to make sure he would eat vegetables before we make it a regular food for him.

In other news, work is GREAT with the new boss! I love it and look forward to going every single day! Life is good!
Posted by Carrie at Wednesday, November 18, 2009 4 comments:

I sent an email to Aunt Megs last night and realized just how many cool things the boys are doing these days.

Jacob is just about completely potty trained. He still sleeps in a diaper, but that's just to make life easier for us for now. I think they put him in a pull up for nap time, too, at school. He has also learned how to dress himself...almost completely. He can put on everything except his shirt by himself. He gets scared when he's putting his shirt over his head. I love it how he is so proud of himself every day when he dresses and undresses himself. Jacob sang his ABC's almost perfectly the other night, too! He even said the "L M N O P." I was so proud of him, so I gave him some candy. And they are teaching the kids how to count to 15 at school. He's getting pretty good at that, too. I love to watch him count things around the house.

Andrew isn't crawling yet, but he's getting closer. He will sit in the living room forever and play by himself while we get ready in the morning and entertaining Jacob. There is such a difference in the play habits between the two boys. Jacob wants our attention all the time, but Andrew is content sitting up where he can see everyone with a ton of toys in front of him. He has cut 2 teeth and literally has another 5 or 6 working their way in. He has mostly good days, but we definitely have bad nights with those teeth. He wakes up about once in the night to eat (another bullet we need to bite and just deal with his crying). He has started to refuse any solid foods except rice cereal. We think the teeth may be playing a part in that, too. So last night, Brian was trying to feed him, and he would just pierce his little lips. So Brian put the spoon on the high chair tray just to see what Andrew would do. He picked up the spoon and put it right in his mouth (yes, there was food on the spoon)! He did this several times before he was done. And then, of course, he would not eat any more solid food. Andrew also likes to wave these days. He will just randomly stick out his hand, and twist it back and forth. I even saw him do it to a little stuffed animal the other day. Friendly little guy!

Both boys play pretty well together. Andrew has begun to throw little fits when I won't let him play with something that he really wants. I can't believe he knows how to do that this early (he'll be 7 months old tomorrow)! I've been bringing down toys that Jacob liked when he was Andrew's age. And it amazes me that Jacob still loves each of those toys. I'm not sure if it's the toy he likes or if it's that he just doesn't want Andrew to play with it just yet. It's probably a little bit of both.
Posted by Carrie at Friday, November 06, 2009 2 comments:

I had so much fun with the boys this Halloween! Friday was the annual Parade of Costumes at the daycare. Jacob ran around the parking lot like he did while flying around the house as Buzz. 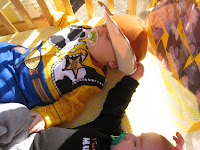 Andrew snoozes before the parade 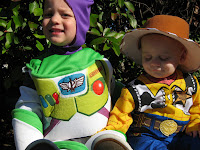 Saturday we all got up early and had a really awesome day. Around 4:00 we started to get the boys dressed in the costumes. Once they were ready, we headed over to see Big Gaga. We practiced with Jacob the entire way over by telling him that if he didn't say, "Trick or Treat," then Big Gaga would not give him any candy. 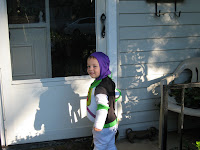 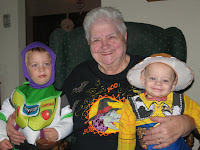 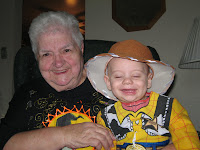 The boys with Big Gaga; Andrew and Big Gaga. Even though his eyes are closed, I still think it is a cute picture.

Then we went to Grandmother's house. Aunt Em and No No (Antonio) were going to come over to see the boys, too. So we ate some dinner and hung out for a while. Jacob helped Grandmother give candy to the neighborhood kids. I didn't take a picture of it, but he was too cute. He would hold the giant bowl of candy and tell everyone "Happy Halloween" as they walked away. We ended up leaving there around 9:30. Jacob was so tired! 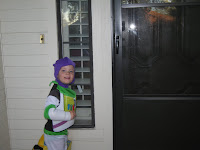 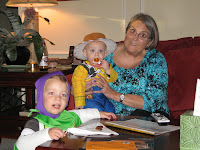 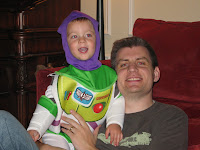 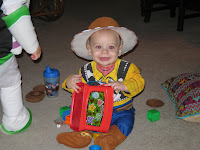 Sunday is football day in our house. I don't really sit down and watch any games, but I like to have one on for background noise. After Dallas beat Kansas City, I decided it was okay to buy a Romo jersey for Jacob (I was not about to buy one after they lost). So we made a big deal about it so that he'd be excited about his Romo jersey and football. Then I dressed Andrew in his little football sleeper outfit. Then I took these super cute pictures. 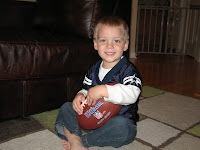 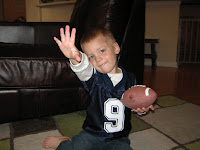 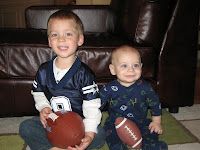 Poor Jacob only saw the last minute of the Cowboy game because it was on during nap time.
Posted by Carrie at Monday, November 02, 2009 1 comment: