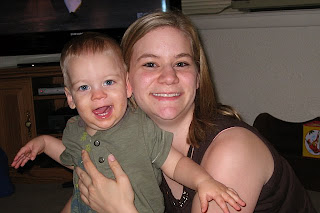 I've been reading some family members' blogs for a couple of weeks, and I finally decided to create one for my kids (we call them munchkins at home). I decided right now was the perfect time to start because I am completely in love with Jacob right now! I am horrible about sending new pictures of Jacob, so hopefully this will help me.
Jacob was near perfect all weekend! Friday night we went to dinner with his Grandmother (Brian's mom). He was very fussy during dinner which is extremely out of character for him. He always behaves better in public than he does at home. He became very happy and excited when I asked him if he was all done and ready to go. On our way out of the restaurant he waved goodbye to every table! It was pretty cute!
Saturday morning he was ready to go at 6:30. Needless to say, I was not. We had breakfast, and then I decided we'd visit Gaumy (my grandmother). She has not seen him for almost a month, and I didn't want to do anything at home. He talked and played and, of course, was fascinated with Oscar the dog. We are going to HAVE to get a puppy one day when we're finished having babies. Then we came home, I fed him a snack, and then I took a nap. He played with Daddy for about an hour. Then Daddy had some errands to run, so I started cooking chicken enchiladas while Jacob took his nap. As I was cooking, I decided to make a little extra to take some to my parents. (My mom hasn't felt well lately, and she has a surgery coming up.) They have not seen Jacob for a couple of months, and I thought a short visit would be perfect. So I cooked like crazy, and Jacob "helped." (He is such a helper! We get at least 1 note from daycare a week about it.) While I was cooking, he wanted to touch the stove. So he kept touching the stove, and he got a few time outs for it. We do time outs Super Nanny style. So at the end of one, I rounded the corner to get him out of time out, and he was standing in front of his door with his hands over his eyes (his room was an office before we bought it. He has 2 doors that have glass on them so he is able to see exactly what is going on when he's in there). As I got to the doors he uncovered his eyes, smiled, and said, "Boo!" It was so hard not to laugh! Then we took the enchiladas to my parents' house. He was exceptionally cute for them! He did "Ring Around the Rosies," "The Itsy Bitsy Spider," "If You're Happy and You Know It," and our favorite of the night "Head, Shoulders, Knees, and Toes." Then he gave them so many kisses before we left. He blew kisses even after we pulled out of the driveway! It was just adorable! I could tell it totally picked up both spirits!

Today Jacob woke up at 7:30. That is pretty late for him! I love it when he sleeps in on Sunday! We had breakfast and then ran a few errands. It is Jacob's week to bring some sensory items to daycare. It was the perfect excuse for me to pick up a few home decor items at Michaels. Then we went to the grocery store, had lunch at home, and took a short nap together. I love taking naps with him! When we woke up from the nap, the Chicago/Atlanta football game was on. Jacob could hear the crowd clapping in the background, so he immediately started clapping and smiling. We were both a little cranky after our nap because we were hungry! So I put him in a highchair and gave him a snack. The Cowboy game was just about to start, so I was telling him about the Cowboys and what a good team they are this year. Then we watched Arizona return the opening kickoff for a touchdown, and I had to explain to Jacob that that was a bad example of how the Cowboys usually play. This evening we took a walk. We've been doing that more and more because the weather has been so nice! There is a boy in the neighborhood who is about 6 weeks younger than Jacob. There were also a few neighborhood dogs out for a walk, so Jacob went crazy over the puppies. Then the two boys were trying to talk to each other. It was really cute! I had a great weekend with Jacob! By the way, Brian has been working a lot! I think he's almost finished with his project. I hope so anyway! He's so much help with Jacob. Tomorrow is his birthday. Happy Birthday Brian!
Posted by Carrie at Sunday, October 12, 2008

I miss that little guy so much! I'm looking forward to keeping up with ya'll on this blog though!

My favorite part of this blog is your explanation of the Cowboys' bad playing to Jacob.. hahaha! That game was painful! Cute pic!! He looks like a little man!