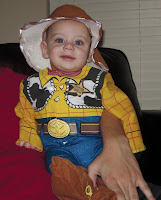 I am still in shock that Andrew is 6 months old! When I think of him, I see him as the 2 month old baby that he was when I went back to work. So here is his update:

Here is a video of his little belly laugh. There is no better sound in the world than a laughing baby!