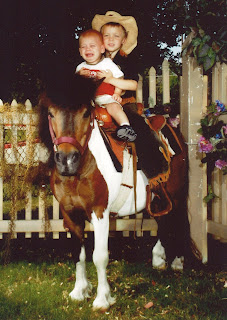 I LOVE this picture! I think Jacob looks so handsome! And, well, Andrew's face is priceless. It's even funnier because they had individual pictures, too. Jacob is smiling, and Andrew is crying. He actually has the exact same face that he has in this picture. And he has new clothes.

My boys are so amazing! I know I say that quite often. Jacob is completely into role playing right now. He likes to pretend to be Dr. Dickey (his pediatrician), a garbage man, an ambulance driver, and a firefighter. Yesterday he literally spent the entire day playing with his fire trucks pretending that Brian and I were on fire. With me he played out the entire scenario. I'm on fire (it's a little morbid as I write it); the firefighters put out the fire; then I get into the ambulance to go to the hospital (complete bed with a pillow, blanket, and stuffed animal for comfort); and then Dr. Dickey (Brian) comes to check me out at the hospital and wrap up my burns. The game took a turn for the worst when Brian told Jacob that Mr. Bananas (Jacob's favorite stuffed animal) had to be wrapped up because he had been on fire. Actually, the game was over after that.

Yesterday morning Jacob was pretending to be the postman. He brought delivered some letters to Andrew. You know...the magnetic letters that are on my fridge. :) I wish I had been awake to see it, but it was my morning to sleep in.

For under $500 resin printers, you can to|you possibly can}'t go mistaken with either the Elegoo Mars series or the Anycubic Mono X. It does include some sub-assemblies already put collectively, but some package constructing is required. With a 220x220 construct floor, there's a Travel Accessories heated bed that can improve adhesion.