We had a great weekend! Friday I took the boys to dinner at Jason's Deli. They love that place! They were so good the entire time we were there. Then I wanted to go to Target because we had to bring the snacks for the kids at the soccer game. I can probably illustrate this best with an equation: Chocolate Milk + Chocolate Ice Cream + A trip to Target that HAS to be done in the same night X= (does not equal) success. They were awful! Jacob was not following directions, and then he started yelling. I had only picked up one item and I was halfway thru the store; I knew disaster was coming if I tried to finish my real trip. So I told the boys that we were going home. Jacob started crying. Then Andrew says to me, "Mommy, I get to sleep in the play room tonight," and Jacob really lost it. He screamed from the back of Target (back middle to be exact) all the way to our car and all the way home, "I want to sleep in the play room." Side Note: Friday and Saturday nights the boys get to watch a movie before bed and then sleep in the play room. I could NOT believe he carried on for so long! We're talking 15-20 Minutes. I carried him out like a baby and let Andrew walk with me holding my hand. Andrew did, in fact, get to sleep in the play room, and Jacob had to sleep in his room. Honestly, this was the worst part of the weekend.

After they crashed, I began my weekend project which I was sure I could knock out! I began taking off the border around our laundry room so that I could paint. Every room in the house (except the two that we painted) are a very generic and ugly peach color. It's all neutral. I'm done with babies, and I'm not pregnant, so it's time to really move into the house to make it our own. OMG! I had no idea what I was getting myself into. It's going to take a while. All I wanted to do is paint, and it will be a while before I get down to that. I was so frustrated on Saturday with it that I didn't do anything else the rest of the weekend. Here are the pictures:
Before: After: 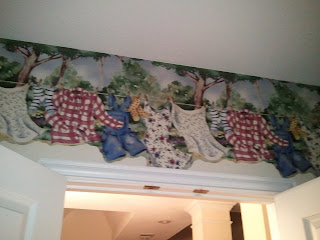 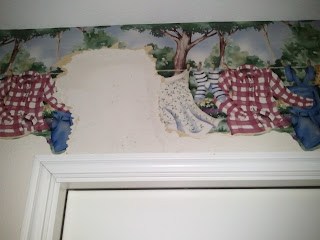 I eventually peeled everything off above the door. The After picture was after Friday night - an hour and a half of work.

The boys stayed at Grandmother's Saturday night, so I went to get them on Sunday. They were dying to play outside when I got there. When we got back home, we were inside for about 2 minutes and then spent the next 4 hours playing outside! They played...I worked. I cleaned up my flower beds, and then I started working on another project! There are two shrubs beside our house. The shrubs have grown into trees. On top of all of that, my neighbors put in a fence...right by one of the damn trees. We are getting rid of them, but I thought I could take care of some of the trimming since 1. I'm capable; and 2. it was absolutely gorgeous outside! Here are those pics: 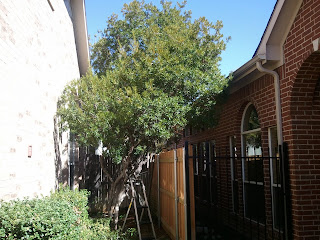 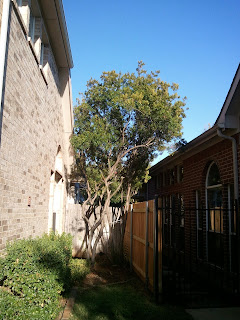 I'm not quite tall enough to get all of the green stuff off, but I got a great start on it! The plan is to make a pretty little walkway to our backyard. I'll keep you all posted!

The ending to the weekend was perfect! All 4 of us curled up to watch a movie and the boys fell asleep: Jacob on Brian, Andrew on me. I hope to keep it all up this week and that next weekend will be just as great! :)
Posted by Carrie at Monday, October 03, 2011