We had an episode at our house last night that gave me a new reason to blog - I want to remember how I got old so fast. The reason would be Andrew. This kid does not give a crap about anything! It is really scary that he has this attitude at 2 - well, 2-1/2 if I want him to sound a little older.

Last night was Halloween. I even dressed up! It was a lot of fun. Jacob was a police officer, and Andrew was Spiderman. Anyway, we make our way through the neighborhood and head back home. Side Note: Andrew has been having a bit of a tough time lately because he is getting 3 of his 2-yr molars at one time. OUCH! He flip-flops on his moods constantly throughout the day. He said a couple of times while we were trick-or-treating, "Daddy, I am so happy right now!" It was really sweet!

So then we get back home, and of course the boys are dying to have candy. It was close to bed time, so Brian decided they could have one each. Then we let the boys play for about 10-15 minutes, and then it was time to brush teeth. The boys were a little upset about bed time, so Brian told them, "If you don't brush your teeth, then we have to get rid of all of your candy. You have to brush your teeth if you're going to eat candy." Mr. Pissy Pants decided he didn't want to brush his teeth. So then he turns up the drama. He was crying so loudly and just not being good at all. Brian finished up with Jacob's teeth and sent us on our way to start a book. Then he brushed Andrew's teeth. And here's the part that is going to make both of us old way before our time - Brian got a trash bag, got Andrew's pumpkin bucket, and told him to put all of the candy in the trash. (by the way, this is totally breaking my heart while I'm reading to Jacob). Andrew never cried! In fact, he started naming each candy as he put it in the trash bag. He did not care AT ALL! WTF?! And Brian told me later that he asked Andrew if he had fun trick or treating, and he told him no.

Bottom Line is that we just haven't quite found his button yet. We think its his independence, but who knows! It's scary when your two year old can turn any kind of discipline into a game.

In other news, the boys were absolutely adorable tonight! We've had the costumes for a month, and there is growing room, so they can play with them for a while. 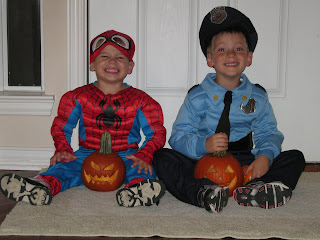 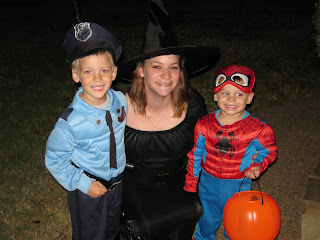 Mommy Witch and her boys 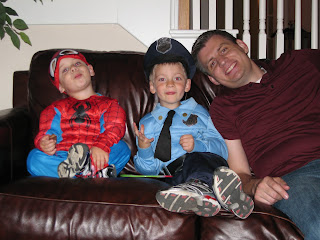 The Most Handsome Guys EVER!