Today was Sarah's family baby shower. I had a lot of fun working with Gloria to put it all together.

First we had the big name reveal. Sarah made the letters and blocks to set out for his name, Grant Michael. I'll admit, it took me a few minutes to warm up to the name. But the more I say it, the more I like it! It's very cute! It's way better than Graham or Benjamin. :) 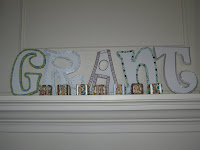 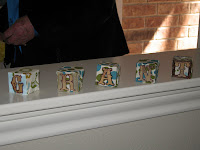 The first part was just mingling. Look who I got to hold for a while! Little Olivia! I'd like to say she liked me for me, but we're pretty sure she could smell milk on me (I'm still nursing Andrew). She was giving me kisses and crawling all over me later during the shower. She was so sweet! And she smelled so good, too. Boys do not smell like that. 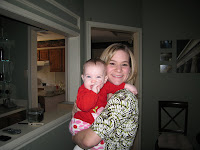 Then it was time for Sarah to open gifts. The theme for the nursery is barnyard animals. 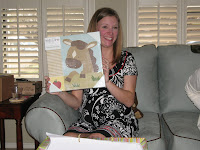 This little shirt says, "My Aunt Rocks." I just couldn't resist when I saw it at Target! 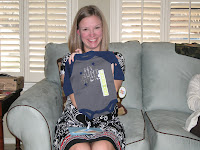