Jacob had the BEST birthday ever! I'm so happy that I made a big deal about it.

The weekend before his birthday, we had a party at Pump It Up! Jacob was so excited! The theme, of course, was fire trucks. Mostly family was at the party. I think the party was a huge success! 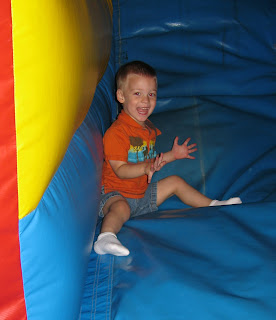 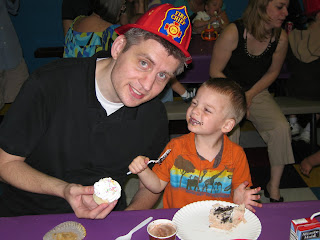 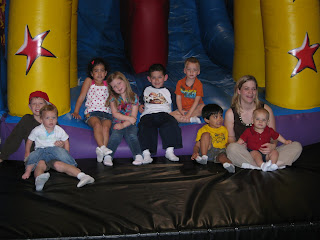 On his birthday, which he knows is Tax Day, we sent cupcakes to the school, and his friends sang Happy Birthday to him. I think he loved it! After school, I picked him up and took him to the fire station. We drive by the fire station every day as a reward for his not having any accidents. But his birthday was special! We walked around the fire station and got to sit in a few fire trucks! He was in heaven! We were there for 45 minutes, and even then we were kicked out because they had to go help people in a car accident. I was so excited to take him, and I'm glad he enjoyed it so much! 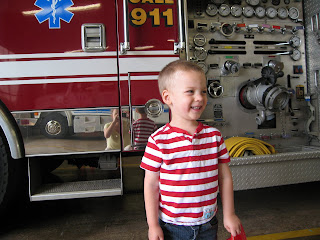 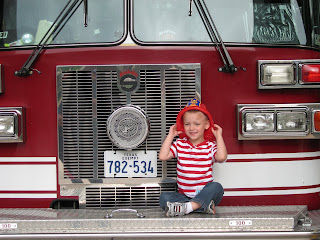 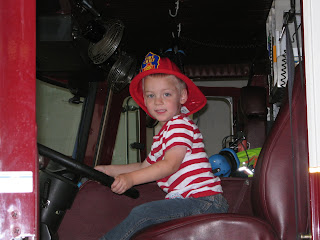 At home he opened presents, ate some cake, and then we played with the new toys! He got this new fire truck for his birthday. It is a HUGE hit in the house! 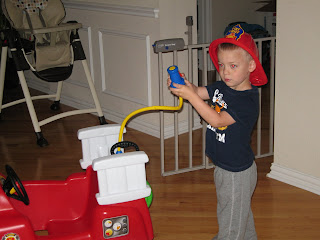 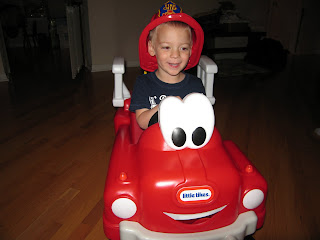 Jacob's birthday was more heartbreaking for me than Andrew's. I just cannot believe that he is 3! He is getting so big, and while we have our 3 year old moments, he really is a great kid! He is starting to get a little sense of humor. We were playing on his easel, and he said, "J-A-C-O-B spells Mommy." I looked around the corner to look at him, and he was smiling so big. He knew he was funny! He was 38.25 inches tall and 31.8 pounds at his checkup. He loves to read books and play with his brother! I am so proud of the big brother that he is! I could not have asked for it to work out any more perfectly.
We are a little concerned with his speech because we are the only 2 people who can understand him all the time. We even have moments where we have no idea what he is saying. So next Monday we are going to see an Ear, Nose, and Throat doctor to have his hearing checked. I'll keep ya posted.
UPDATE: Jacob's hearing is fine. Now we are trying to get him into some speech therapy. Honestly I've seen a slight improvement in the last few weeks. I'm not that worried about it, but we're getting an evaluation anyway. It looks like it could be July or August before we can get in, though.
Posted by Carrie at Tuesday, May 04, 2010

I LOVE the shot of him on the front bumper of the fire truck! Sounds like he was in heaven!!