So we signed Jacob up for Spring Soccer because he really loves playing.  We knew before we signed up that this would probably be our last season with the YMCA.  They have made that decision easier than we could have ever expected.

The coach called to let us know the information, and two things really stuck out to us - he sounded pretty young, and he sounded like he was reading a script.  Okay...that just makes the first practice interesting.

Brian came home after the first practice and said that the coach was 12.  I thought he was being too critical of the coach; maybe they would let a high schooler coach, and that's fine with me.

Oh no!  The coach is literally 12 years old!  W.T.F?!  Game day was completely nuts.  He was unaware of the rules - like no goalie, no score keeping, and that he gets to be on the field to help lead his team.  At the end of the team, he gathered everyone together and paid each kid a compliment - except Jacob.  Jacob is not the best soccer player, but at least he runs the field.  He's not aggressive, so he doesn't get much action with the ball.    That was just the icing on the cake though.

So yesterday I emailed the coordinator of youth sports to express some concerns and to try to get to the bottom as to how a 12 yr old can be the head coach.  I was thinking, and maybe hoping a little, that they would be surprised by this.  I was very polite in my email because I didn't want to cause a problem or create a big deal about it.  I received a response pretty quickly.  The coordinator had forwarded my email to the executive director of our YMCA.  Here are the highlights:
Are you kidding me?!  It's just so weird to me that I feel like I'm the crazy one for feeling like it is weird.  So now we have shifted the power of the soccer decision making to Jacob.  We can do practice drills here with him.  If he wants to go to games, we'll go to the games.  If he isn't up for any of it, no biggie.  It's really not worth the fight - they are nuts! 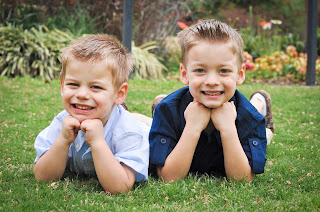 In other news, we have two more birthdays coming up in the house.  Andrew's is April 7, and Jacob's is April 15.  The boys spent last weekend at my parents' house (Happy Birthday to me!), and my mom was asking them about what they wanted for their birthdays.  I think I could get Jacob a shirt that just said "POLICE" on it, and he'd love it.  The kid lives and breathes taking people to prison and being a police officer.  And now he's into legos, too - let me tell you, I am pumped - not.  So many pieces!

Andrew is in a funny phase.  He is kind of into police because Jacob is; he pretends to have super powers because Jacob does; and he is really into firemen right now.  Apparently he told my mom that he wanted a Spiderman costume for his birthday.  So she asked me if we had one, and I told her yes - it was his Halloween costume last year.  I decided to ask Andrew about it last night at bed time.  It went something like this:

Then I asked why he wants two; the concept of why is lost on him right now.  So instead he explained that he had to really sound out Spi-Der-Man to Grandma Rose because she didn't understand what he was asking for.  :)