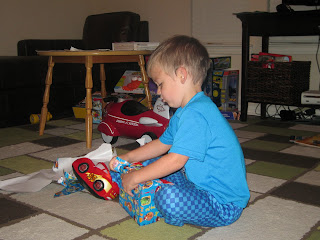 One way we completely failed him on his birthday is that we didn't sing Happy Birthday to him at all! I mean, he got it at their party (crap...another blog post To Do), and his class sang to him. But we did not. We went to Jason's Deli for dinner (his favorite place!). He chose to have ice cream there instead of cake at home. It wasn't until bedtime that I realized we did not sing to him.

I do have to say that Jacob is growing into such a wonderful boy! Here’s what he is up to these days: