Like last year, we decided to throw one big birthday party for the boys.  They wanted it at the bounce house place, and you really can't beat the price when it's a two-for-one party.  We invited 11 of Andrew's friends, 13 of Jacob's friends, and invited 5 other family members and friend's kids.  Almost everyone showed up.  Look at all those kids! 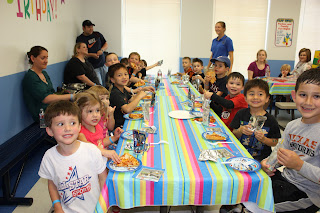 We have become somewhat close with the families at our school because we all have kids around Jacob and Andrew's ages.  The families are so nice!  I didn't see much of my kids inside the bounce house room because I was chatting it up with the moms.  I walked around with little Abby for a while, and that really raised some eyebrows: "I know I haven't seen you in a while, but I don't think it's been THAT long.  Where did the baby come from?"

I reused Marlene's 60th birthday cake that my mom had at Easter.  I think it all worked out alright.  The original plan was to re-ice the entire thing.  Then I got anxious that I would royally mess it up and have no cake at all, so I made the most with what I had.


﻿ After the party, I had invited the family to come over to our house.  One reason is because the bounce house place, while fun, is a bit crazy.  And if you don't have kids, it's not that fun if you're just sitting around and waiting for the cake and presents part.  Second, I had decided that we were not going to open gifts at the party.  We did that last year, and we were completely crunched for time.  It was complete chaos.  So I made queso, a veggie dip thing, and had beer and wine at the house.  Jacob liked this setup so much that he is already asking if we can have his birthday party at the house next year.  Actually, as I just put him to bed, he asked if we could have a birthday party at the house for him next weekend.  I had to break it to him gently that we are not celebrating Mommy's, Andrew's, or his birthday until next April (March for me, but it was too late to get into those details). 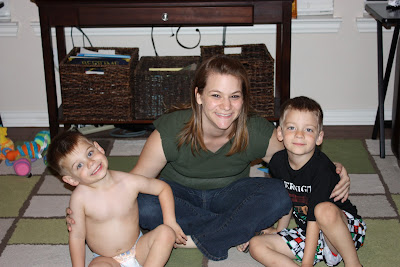 I feel so blessed for my kids that they have made such wonderful friends in their short little lives.
Posted by Carrie at Sunday, April 15, 2012