We survived Andrew's birthday and the Easter Egg Hunt falling on the same day!  It was a great day!  My little boy had so much fun, the weather was perfect, and we all had a really good time.

Brian made a big deal on Friday night about how when he woke up on Saturday, he would be 3.  He woke up around 3:30 Saturday morning, and he came to find me (I had crashed in the living room watching tv).  I asked him right away, "Are you three?"  He said, "No.  I'm still 2.  It's not morning yet." 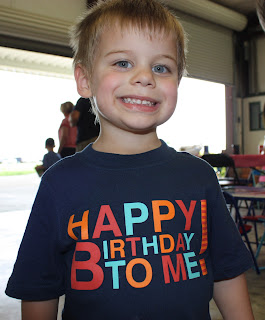 So when we knew for sure it was morning, I started making a big deal about his birthday.  I bought each boy two small toys - Lego City Police crap ($30 for each kid...not too bad!) - so I asked him if he wanted to open his presents.  Here's the thing with Andrew - he LOVES attention but only on his terms.  So he started kind of fussing and saying, "I don't want to open presents."  I just left him alone for a while, and then he found them and became very interested.  I got him a Police Motorcycle and an Ambulance.  The ambulance is complete with two paramedics, a stretcher, and a little boy who has fallen off of his bike (bike included with a street corner that has a trash can, fire hydrant, and stop light).  It's pretty cool!  So I built the two little toys for Andrew, and he and Jacob got busy playing police and ambulance.

When we arrived in Red Oak for the big egg hunt, I wanted to check the surprise slideshow for Marlene.  I had exchanged a few photos the night before, and I made the end a little longer for a definite beginning and end when the DVD looped.  It was just about to start over again during our preview when we heard two voices in the garage - Marlene and Bruce.  She didn't see anything because she was distratcted by the funny posters we had hanging in the garage.  Phew!  That was close!  Around 11:00, or maybe 11:30, she and I had our first drink.  I had not eaten anything, so I felt the effects immediately.  And then I maintained it all day.  It's been a really long time since I've done that.


My kids were so excited about the egg hunt!  They had been scheming for a couple of days about how many eggs they were going to get and how they were going to get the big chocolate bunny and share with the other one.  This year they went out in different age groups.  They did pretty awesome, too!  I went with Jacob.  That kid can run fast!  He ended up with 19, and Andrew ended up with 16.  I was pretty proud of them!  The rest of the day was filled with the band, playing on the dirt piles, and sneaking in a movie for quiet time.

I took the day off on Monday to take the boys to a couple of appointments and have a fun day with them for their birthdays.

First stop, Andrew's 3 year check up.  I had prepared him the night before for everything the doctor would look at and do and for the dreaded shots.  He handled the explanation very well!  He used to start to cry when the nurse would call us back.  Now, with my little pep talks, he walks in there like a little man!  His stats:


And, bonus treat for Mommy - No Shots!  Huge relief!  he's always felt crummy after getting shots, so I thought it might ruin Fun Day.

Next stop, Snack at Whataburger.  We squeezed this in so that I could have breakfast and we had to wait for the haircut place to open.  Third stop, Haircuts.  They always do so well!  They danced to the music while waiting for the other, and Andrew was especially excited about the lollipop after the haircut.

Fourth Stop, Dentist.  Again, I have to give them pep talks to make sure they know what is coming.  This is where I was super proud!  Both boys sat for cleanings and Jacob got x-rays.  Side Note: I felt like x-rays were a bit overkill, but I have horrible teeth and I'm convinced my children are doomed.  The news story the next morning about how dental x-rays are linked to a specific brain tumor really made me feel like I'm a crazy mom.  We were finished with all 4 stops by 11:00 a.m.  I was SO tired!

Then we got into the car and I started asking them what they want to do for the rest of the day.  Chuck E. Cheese made the list, and I was totally okay with that.  I didn't think it would be as crazy as a weekend, and I was right!  They ended up spending most of their time in this little tunnel playground thing.  I could hear them chasing other children in there and, of course, they were making siren noises at these poor kids.

The next request from the boys: Free Play.  Jacob kept talking about Free Play.  I suggested the Museum and the Zoo, and Jacob insisted on Free Play (Andrew, of course, kept saying "I don't want to go to the zoo...I don't want to go to the Museum).  So I asked Jacob what Free Play was.  This was his answer, "Free Play is where we can play with whatever toys we want to at home."  Did I mention I took the day off for this?!  Really?!  He just wants to spend the day at home playing with whatever toys he wants to.  Well, it's their fun day, so that's what we'll do.  I fell asleep as soon as we got home.  Andrew cuddled with me during the second half of the nap.  Then I ran to the store and took the boys out for dinner that night.

It was such a full day, but so much fun!  It made me appreciate the little people they are becoming even more.  They are really good, sweet boys, but what else do you expect their mother to think of them?!  lol!
Posted by Carrie at Sunday, April 15, 2012