I still have not had time to scan the sonogram pictures to get them posted. It has been crazy at work the last couple of weeks. I have a few other pictures and some videos to post, and I hope to get all of that up this evening.
Jacob has been especially cute and full of new tricks lately. I hope his little brother is as easy going as he is, but really what are the odds of that?!? Last Friday night we went to see Santa with Steve, Gloria, and Matthew. Matthew has always been afraid of Santa, but this year he was not at all! For his Santa pictures in the past, Matthew was always standing next to Santa. This year he hopped right up into his lap. Jacob, on the other hand, screamed! We thought it would be really cute to get a picture of the boys together with Santa. No such luck! Of course, we did not actually get back to see Santa until almost 9:00 at night, and Jacob usually goes to bed at 8:00. He was really good until we tried to put him in Santa's lap. We had a great time with Steve and Gloria!
The following day was my company's Christmas party. Steve and I organize the party, and from what we're hearing it was a huge success! Jacob was pretty good throughout the party. I was sure there would be a constant background noise of "Mama....Mama....Mama," but Brian and Gloria kept him occupied. After the party, he and Matthew ran around the room together. It was too cute! Jacob ran away from me to look out a window. Then Matthew told me, "I'll get Jacob." So Matthew went to Jacob, grabbed his hand, and they walked back to me. You could just see it on Jacob's face how excited he was that his big cousin was holding his hand. I have some pictures of them playing together. I cannot wait until this weekend because we'll be at my parents' house and they can run around more than they could at the restaurant.
Jacob's new favorite thing to do is vaccuum! I LOVE THIS!! Last week, we gave him a dust buster. This week, he can push and pull the bigger vacccuum (the dust buster is an extension of the big vaccuum. It's great for hardwood floors and it is super light!). For the last two nights he has asked to vaccuum right after dinner. While he vaccuums, he says his word for vaccuum. And yes, there is proof of all of this! Watch out for my video which should be posted soon!
Last night at dinner, I had some grapes on the table. Jacob usually just says "More," but last night he actually said, "More grapes please." I could not believe it! He has reached a point where he will sign for please about 50% of the time and say the word for the other 50%. Then this morning Brian woke him up. They came into the bedroom, and Jacob gave me a big hug (he had this weird mischievious smile on his face, but he didn't do anything bad). Then he did his stinky sign, so I asked him if he was stinky. He said yes. Then he said, "diaper." And I said, "Would you like a new diaper?" "Yeah," he responded followed with "mi" (milk). He likes to drink his milk while I change his diaper. This has been our routine for a while, but it was neat to see him say everything before I could ask if he wanted this and that.
Here is his holiday picture from school. I cannot believe he is actually smiling! 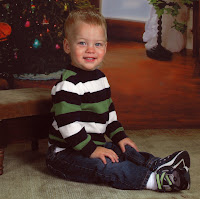 SO PRECIOUS! I need a picture!!!

Happy New Year!
I love checking the blog and catching up with everyone. Thank you for taking the time to share. Jacob is gorgeous and lots of fun. He is so innocent now--I am sure he has no idea how his world is about to be shaken up.
Love, Susan

That picture of Jacob is adorable!