WOW! Has it really been 4 weeks since I've blogged?!?! How am I going to keep up with this when Munchky 2 arrives?!?!

Our holidays were great! Brian's mom kept Jacob for 2 nights over the holidays, and it was wonderful! We have not sent him away for an extended amount of time for months! The first night she kept him, we actually went out to dinner, just the 2 of us, at like 10:00 p.m. We went to Texas Land and Cattle, and it was only us and one other couple in the restaurant area. Then we went home, and he played a game on the 360 while I played The Sims (his game reminded me of The Sims and I just HAD to play it), and then we fell asleep on separate couches upstairs. Romantic, right? hehe...we spent the entire day together, and it was really nice! The next morning I did what every mother does after a night away from her child. I busted my ass around the house while he was gone and while I let Brian sleep.

She also kept him New Year's Eve for us so that we could go hang out with some friends. This was also a lot of fun, but I heard horror stories about the second-born children. Basically I'm now expecting M2 to be very high maintenance and a horrible listener. Not really, but I'm not expecting another Jacob.

We went to the doctor and had another sonogram. Everything looks great! It looks like I will have a c-section scheduled for the week before Easter. If he waits that long (I only say that because Jacob arrived 10 days before the scheduled c-section), this means I will miss the annual easter party at my parents' house. This year happens to be the 30th anniversary, and yes I will be the first one from our family to miss. I'm a little bummed about it, but it's better than scheduling the surgery for any date closer to Jacob's birthday, April 15. We still do not have a name for the little guy. It has been a lot harder this time! I'm not too worried about it....we have to give him a name eventually!

In other news, we finally got a real "family" car. We got a Ford Taurus X (it's a crossover and very similar to the Ford Flex) last weekend. It is so much easier to put Jacob in the car now. The seats fold down easily too! It's great!

Of course, Jacob has been adorable! He is talking so much! At one point he was saying "mimees" for mittens. We got a Roomba for Christmas from my father-in-law (thank you, thank you, thank you! We love it!), and we have decided to call it a robot instead of a vacuum. Jacob is obsessed with it. When Roomba goes back to his home, we tell Jacob that the robot is going nite nite. So he'll tell us about 100 times after that "bobot nite nite." He has also learned the letter O over the holidays! I think this is just awesome! He even points out the O's in books now.
He got an Elmo Live and a little ATV from us for Christmas. He loves the ATV, and he loves to knock Elmo over so that he'll ask Jacob to help him back up. Enjoy the pics from our holidays! 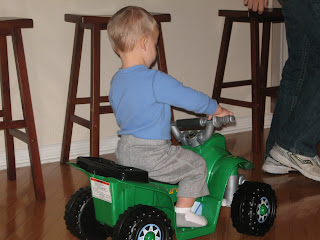 Jacob on his ATV Christmas morning 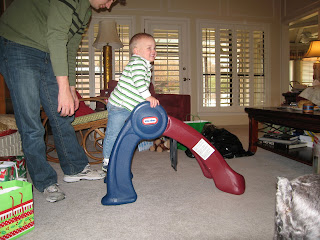 Jacob on his slide from Grandmother 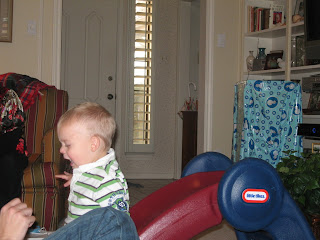 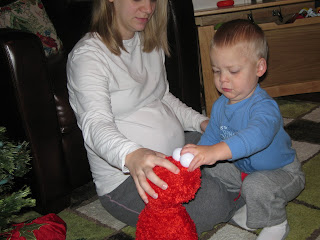 Checking out the new Elmo 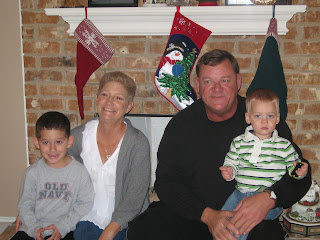 Jacob and Matthew with Grandma Rose and Papa 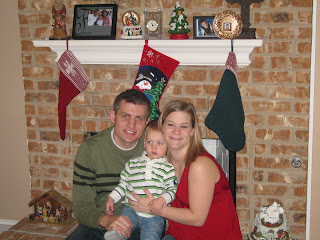 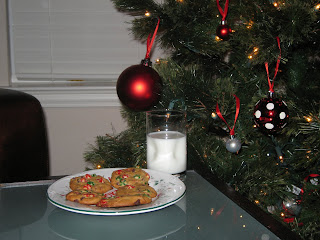 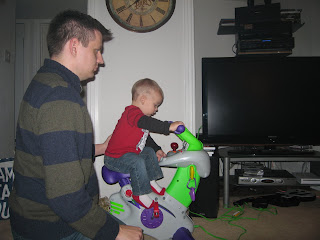 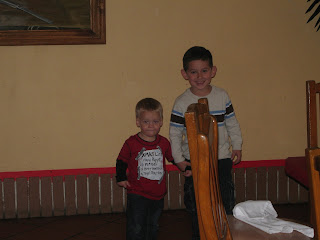 Jacob and Matthew at Astro's Christmas Party
Posted by Carrie at Friday, January 09, 2009

I'm so happy M2 and mama are healthy! I'm excited to learn my new nephew's name too...

I love the picture of Santa's milk & cookies, carefully staged to include only the portion of the tree that was decorated.

We will miss you at Easter! The Easter bunny will have to bring some confetti-filled fun to your house!

Thanks for sharing with everyone that I staged the milk and cookies pictures. That's what sisters are for! Good luck on your surgery today to get rid of your freakish belly button. <3