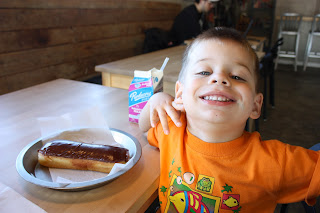 Day 2:  We started off the day by going to a donut shop that was made to be a big deal.  I don't remember the name of it now or even why there was so much hype about it.  I don't have a huge sweet tooth, so a donut is just okay for me.  The boys were pumped, though!  Unfortunately, Jacob got sad about something while we were in the donut shop.  I think he told Brian he wanted one kind of donut, then he changed his mind, but he didn't relay the message before Brian ordered.  In those situations, Jacob just stops talking and he starts kicking and pouting.  The kicking isn't hard, but its definitely an expression of frustration.  Neither Brian nor myself have much patience for it.  Anyway, Jacob and Brian ended up spending our donut time in the car.  Brian told Jacob that if he calmed down, they could go back inside.  The kid just carried on.  And we had a potty break in the mix, too.  Crappy start to the day.  The good news is that it was the only meltdown of the day!

﻿      We had NO plans for that day except the wedding.  I didn't want to stay cooped up in the hotel all day, so I found a park where we could go to play.  Sarah and Derek and my parents came, too.  After the park, we were hungry.  So we called Steve and Gloria and the whole gang met up again for lunch.  Then we went back to the hotel to catch a snooze before the wedding.

﻿﻿ Wedding: This wedding was by far the best one I've ever been to.  If you know my cousin Jaime, you know she is a hip lady.  ha!  She appreciates tradition, but she is going to add her own twist.  And she doesn't add the twist to be different - she adds it because it is what she truly wants to do.

My boys were SO handsome!  Brian took care of their suits.  I was ready to just put them in casual khaki pants and a polo or button down shirt.  If you know anything about Brian, you know that he truly appreciates dressing for the occasion.  No kids of his are going to a wedding dressed down. The man has excellent taste!


Jaime and Chris, her husband, were totally beaming!  I don't know that I've ever seen a groom's face as lit up as Chris'.  Jaime walked down the aisle to a rock version of the wedding march.  Everything about her wedding was like that - it's not something that you're expecting, but it totally fits and makes sense for Jaime.

The food was AMAZING!  The drinks were AMAZING!  The entertainment was AMAZING!  To kick things off, she and my uncle Art did the obligatory father daughter dance.  Jaime is a sap like myself.  So when the song Butterfly Kisses started playing, I thought to myself, what the hell is she on?!  Then, Art went up to the DJ and gave him some money.....and the Party Rock Anthem began playing.  They had this whole thing choreographed.  So fun!  My next observation is that all music was dance and party music.  No slow songs.  This worked out for me because my family bailed pretty early.  Jacob and I did get in a few good dances.  Jaime had a Van Halen cover band play her wedding....apparently Chris is a huge Van Halen fan!  That was probably the best money spent on the whole wedding in my opinion.  The members of the band were so nice and they were extremely talented!  Between sets, we did a Girls Flash Mob.  I had too much to drink by that point, so I don't really know how I did.  It was so fun!   I've always wanted to do a flash mob....you know, since they became popular.  ha!

After the wedding, those of us left standing met in the bar at the hotel.  I only lasted a few minutes before I had to have Derek escort me to my room.  I was sure I was going to be sick, so I just crashed in bed with my dress on.  When I woke up the next morning, the boys asked if we were going to another wedding.  Yeah....funny, but not my best Mom moment.
Posted by Carrie at Saturday, August 25, 2012