Jacob had his Pre-K Graduation about two weeks ago.  It was such a nice ceremony that I felt better about the money I pay to the school.  No lie.  He looked so handsome in his cap and gown!  We have known most of these kids since they were in the infant room with Jacob, so it kinda felt like I was watching a bunch of "my" kids graduate. 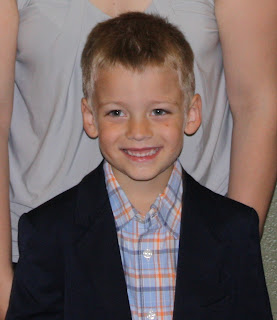 The ceremony began with the kids singing two songs.  Then they came out into the aisles at the church, and they did the Cha Cha dance song.  You know, the one where the guy says the next moves and you're supposed to do it.  Anyway, it was WAY cute!  I had no idea Jacob knew that dance.  Then the kids went to the back to wait for their little diplomas.  The director spoke a little about the school, teachers, and the classes of kids.  Then they showed a slideshow of pictures of all of the kids from the time they were babies until now.  There were some dry eyes in the audience, but most were a little wet.  :)

Then the big presentation of diplomas began.  They called each child's name, and then they announced what he/she wanted to be when they grew up.  Jacob said that he wanted to be a police officer and that he would take bad guys to federal prison if they shoot a mail man.  The winner of the night, though, was given by this little boy named Nathaniel.  Jacob has literally known Nathaniel all of his daycare life.  Nathaniel is a few months older than Jacob, so they weren't always in the same classes.  The neat thing about Nathaniel's family is that he was adopted, and his parents adopted his biological brother about two years later when he was born!!  I love that!  Anyway, Nathaniel said that he wanted to get married three times and that he would leave his kids and girlfriend to go to his job as a zookeeper.  That's pretty impressive for a 5 yr old!  I love the married 3 times.....hysterical!

We are so proud of Jacob!  Every one of his teachers has raved about what a wonderful student he is.  We thought they were just being nice at first, but its true.  He has only had 2 timeouts EVER in the 5 years that he's been in school.  And those have been in the last six months.  I'm not gonna lie, it makes me nervous for the teenage years.  But I am SO proud of him!  I can't wait to see what the rest of his school years have in store for him.